We know art offers the chance to explore ideas and creative concepts. For people living with brain injury, it also provides an incredible opportunity to process and express their experiences – from the early stages through to the challenges and successes of recovery and day-to-day life.

On a practical level, art as a form of therapy helps people with brain injury to improve fine motor skills, concentration and attention while relieving symptoms of stress and depression. It can also be an opportunity to build social connections and self-esteem by taking part in group classes, visiting exhibitions and participating in community events.

We spoke to three people with a brain injury from our community and asked them what art meant to them and how they’ve told their stories through the visual medium. 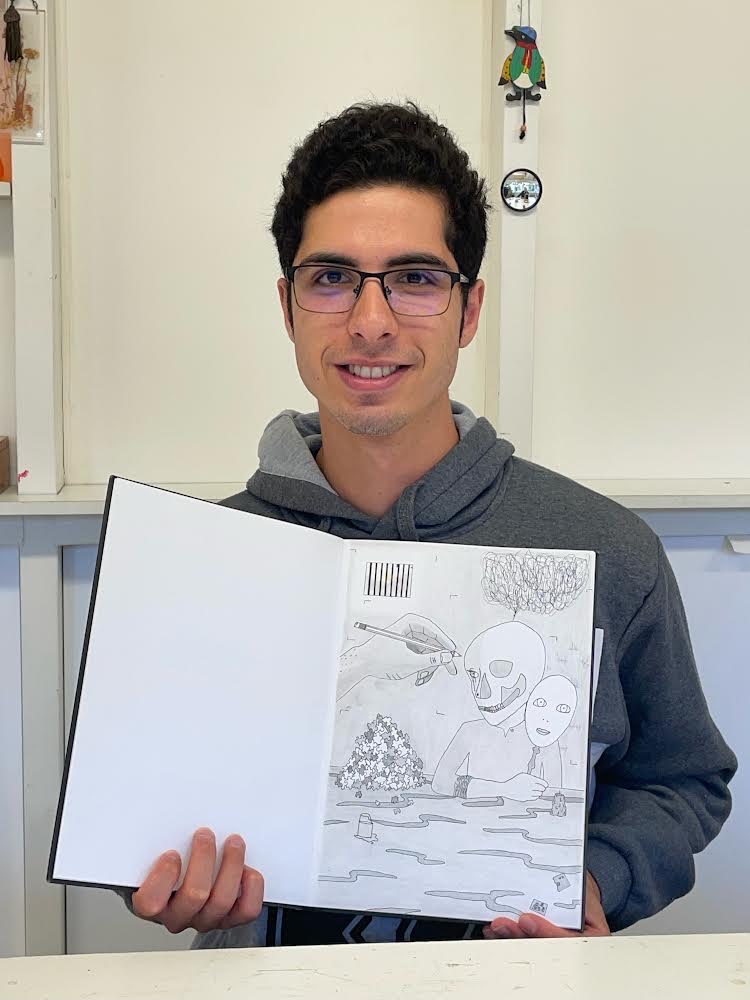 Daniel is 20. He sustained a brain injury following a motor vehicle accident in early 2019. After months of rehabilitation in the Liverpool Brain Injury Unit in NSW, he returned home in time for Christmas later that year. He uses art therapy in the same way he uses physiotherapy, speech therapy and occupational therapy – to aid his recovery.

He has been interested in art since he was a child and enjoys drawing, primarily working with pen and watercolour pencils.

“Drawing is important to me as another way to describe what is inside, what I am feeling. I can be mad or angry but being able to draw and express how I feel gives me relief. I use symbols and colour to express the meaning behind my artwork,” Daniel said. 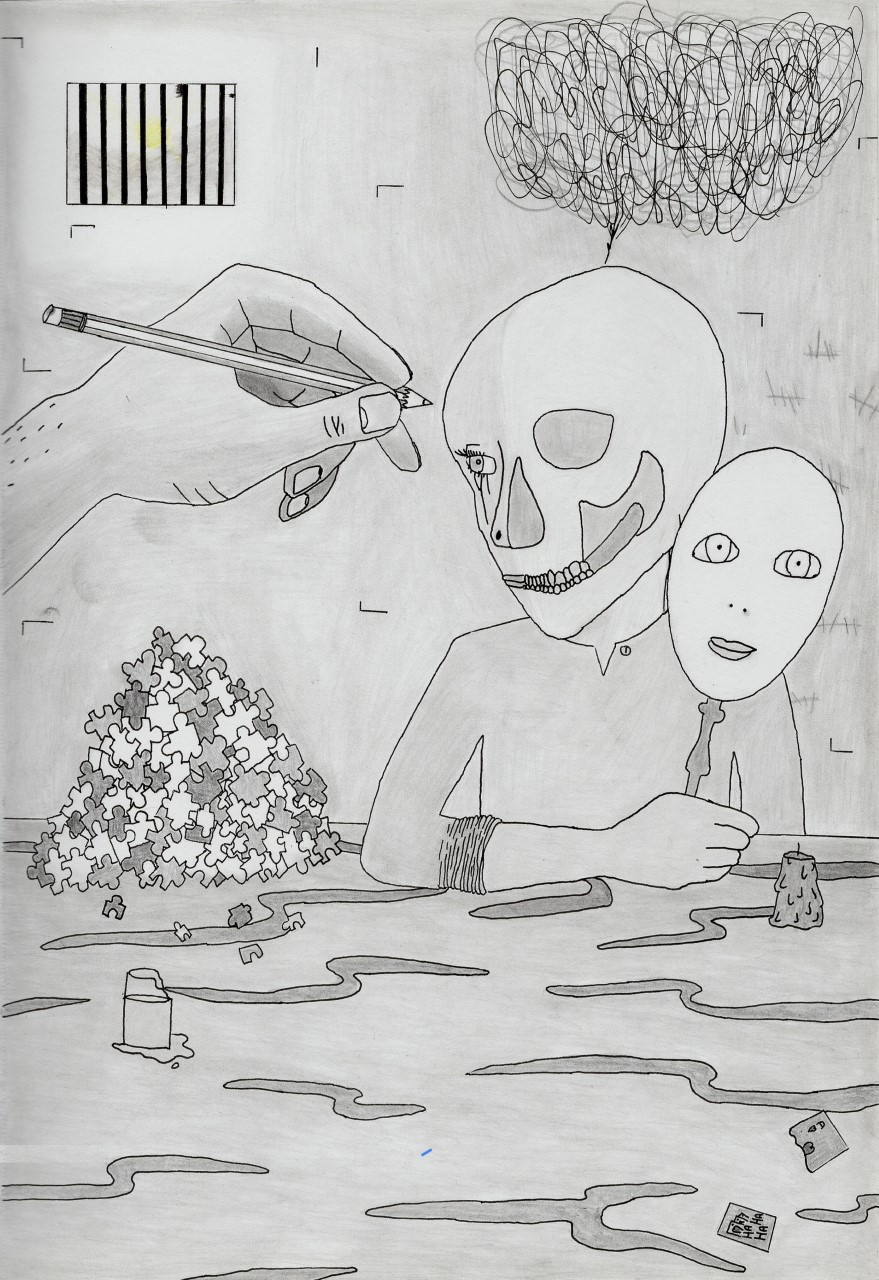 The hand on the side is me drawing the picture and how I feel at the moment. The character’s face is half crying, half skeleton, feeling he is dead inside. He is holding a mask, and the scribble above his head represents his thoughts, his mental anguish. The ace and joker cards on the table are special cards and have been ripped. The glass on the table is broken, showing it is hard to drink to survive. The candle on the table has burnt down and gone out. The pieces of the puzzle are all jumbled up. The tally on wall marks the days. The window is barred, making escape impossible. Behind the bars is a glimmer of sun. 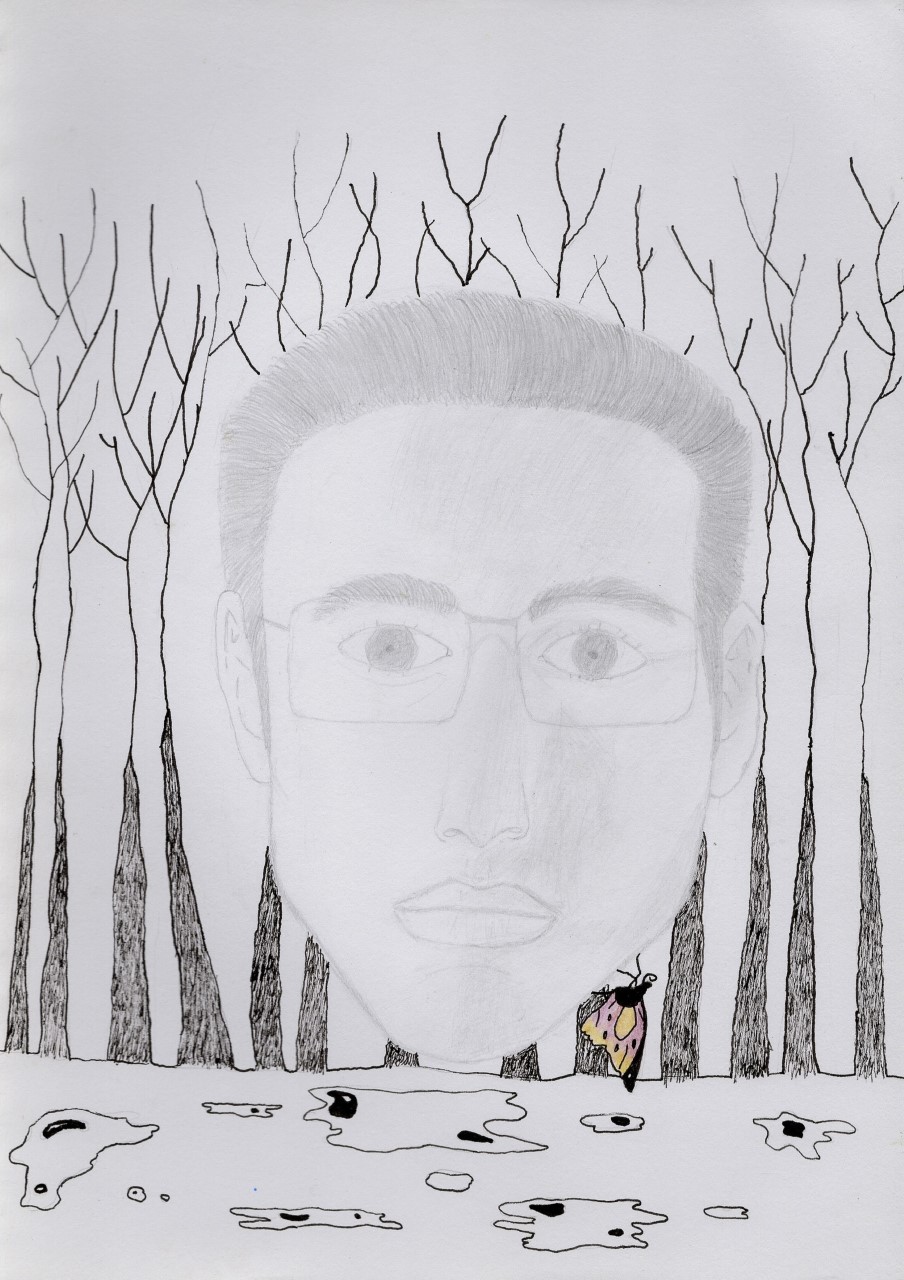 This is a self-portrait. Nothing of my body is showing, my head is disembodied. My face is surrounded by my thoughts. I’m pictured in an uncomfortable place. A swamp with muddy water beneath me and trees reaching up to find the light, they don’t have any leaves, which are essential for their survival. The butterfly resting on my jaw has its wings closed, hiding the intensity of its colours, its beauty.

In 2020, Jodie acquired a moderate brain injury as a result of meningitis. In the early stages of the injury, she experienced extensive paralysis and lost the ability to communicate. After weeks in hospital, she regained movement and much of her communication skills, however, she was left with impacts to her cognitive function.

With the help of her rehab team and specialists, Jodie has been able to return to work on a part-time basis and continues to care for her children, however, she says that life now is not without its challenges.

“On top of things like fatigue and communication difficulties, there’s a lot of emotions to deal with – having to acknowledge my limitations, sadness for the things I’ve lost and frustration about the stigma that exists for people with a brain injury,” Jodie said.

Jodie has a long affinity with art, particularly using painting and playing music as an outlet to explore and express emotions. She studied creative arts at university, but life with children and work commitments meant she didn’t have the time, inspiration or energy to paint purely for the pleasure of creating something beautiful. But, adjusting to life with a brain injury has seen Jodie pick up a paint brush once again as a way of working through her emotions and experiences.

“Painting is a way for me to explore what I’m feeling and let those emotions out. I don’t do a lot of planning for the pieces I create, I just try to channel what I’m going through in the moment – be that sadness, frustration or anything else I’m feeling about what’s going on for me,” Jodie said.

She often reflects on how she can make things better for people who are going through brain injury and hopes her art and the conversations her creations evoke can debunk some of the stigma around how people with brain injury are perceived.

The left temporal lobe.
That’s where the injury was.
It could have been worse.
I’m lucky to be here.
I feel guilty.
I feel like a fraud.
I feel like I’m trying to be someone who I used to be, but just can’t be any more.
I’m the same, but different.
It’s the differences that I have to be OK with.
A part of me was broken, but…
I’m fierce.
I’m determined.
There’s still more life to live.

During his childhood, David suffered head trauma on two separate occasions, which resulted in both brain injury and hearing impairment in his right ear. Going through school, he struggled to absorb and retain what was being taught, but has always been comfortable speaking with people one-on-one.

David also lives with schizophrenia which further complicates the effects of his brain injury. He describes this combination as “cognitive malfunctions”, which he found significantly more challenging during COVID-19 lockdowns over the past two years.

In 1994 David backpacked across the northern hemisphere and visited many of Europe’s great art galleries. Soon after returning to Sydney, he attended the Archibald Prize Exhibition with a group of friends and was inspired by the colours in the works on display.

Since then, David has pursued painting passionately, finding it to be relaxing. It also reduces his distressing and disturbing thoughts. He paints in bright, pre-mixed primary and secondary colours – he struggles cognitively with the thought of mixing paints then not being able to replicate the same colour again.

“My art keeps me alive and coping with many of the struggles I face. The message I try to convey are justice for the evil and wrong in the world and that ultimately, good wins out,” David said.

David is active in the Sydney community arts scene, recently winning the City of Parramatta International Day of People with a Disability art competition. He resides with his beloved Russian Blue cat ‘Kiska’ who has inspired many of his works over the years. 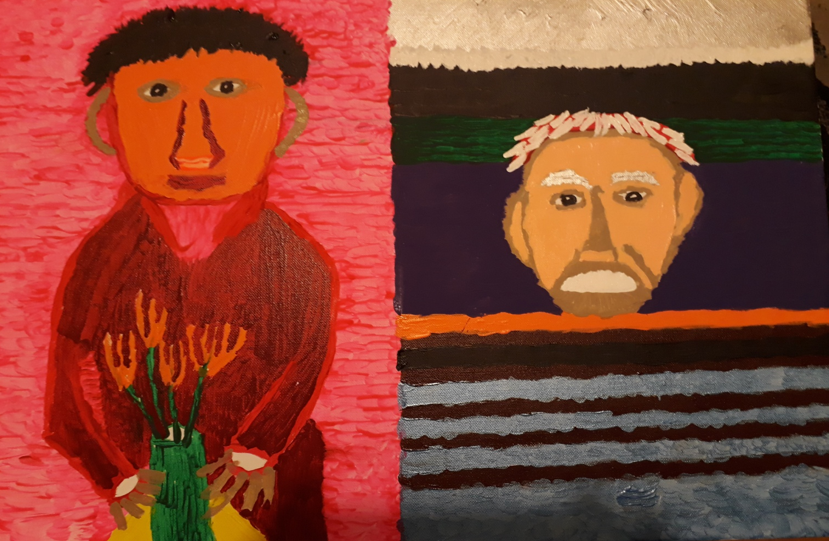 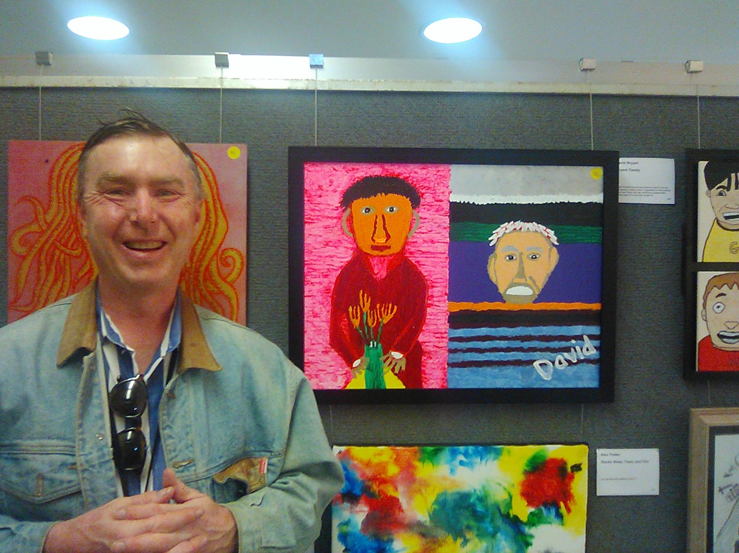 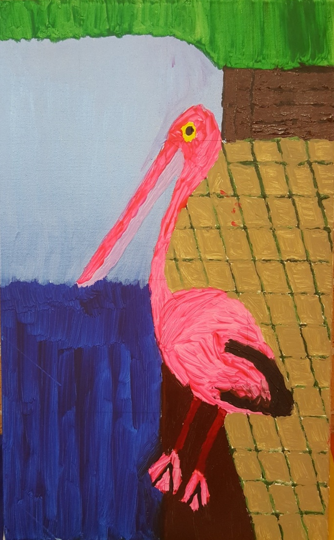