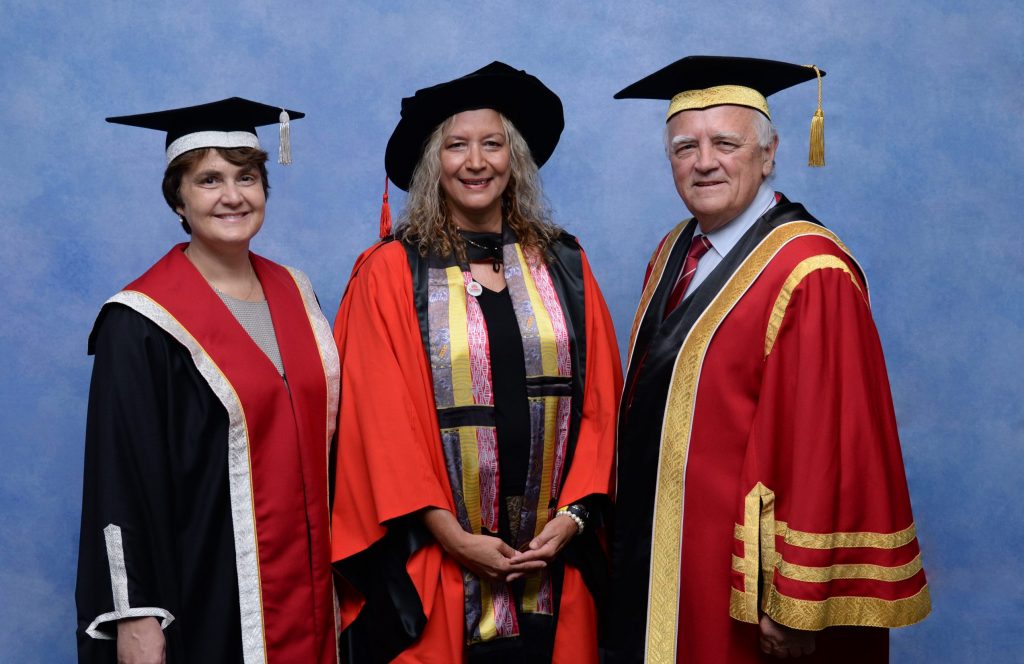 Ms. Cullen said, “I’m over the moon and proud to be receiving the degree of Doctor of the University. This is accumulation of nearly 30-years of work in this sector.”

Since 2008, Ms. Cullen has led Synapse as CEO to become a national organisation providing specialist services, support and housing for people impacted by brain injury and disability.

“I first became CEO when Synapse was called Brain Injury Queensland. We were a small organisation then and it’s been exciting to see Synapse grow and our services reaching more Australians. Synapse growth has been driven by our partnerships with community, and people with brain injury and disabilities.”

“When I first started working with people with disability, I realised over time that they didn’t have the same access to things that other people take for granted and weren’t included in our society the same way as people who don’t have a disability. It’s important that everyone has the same opportunities and is treated in the same way, whether they have disability or not.”

Ms. Cullen actively seeks opportunities to support people living on the margins of society and her work reaches into areas with the aim of creating large-scale change.

“I first supported people directly, but I always wanted to change things for more people and for the people that often get overlooked. Over time I’ve worked with others to advocate and create change in areas in which substantial numbers of people with disabilities and brain injury interact, such as criminal justice, and housing and homelessness.”

Ms. Cullen is a descendent of the Bidjara and Wakka Wakka people and has worked collaboratively with the community to revolutionise housing for Aboriginal and/or Torres Strait Islander peoples with brain injuries through an award-winning housing project in Cairns that promotes self-determination through connection to land, country and culture.

“Throughout my 30-years there have been so many highlights and so many complex situations, but for me, the one thing that will always hold a place in my heart and head will be the project in Far North Queensland.”

“I call it nine years dreaming because that’s how long it took from the beginning to the opening. The fact that it took almost a decade to complete shows that sometimes it does take time to affect change, but at the end, holding steady to what you know is right, and holding on to the dreams that other people ask you to hold on to, is what holds you steady to the end.”

“For me research is the opportunity to show people the truth. When people say that certain things don’t work or that there isn’t a problem, research allows us to take what we know to be true and have it proved by evidence. When people say there isn’t an issue with Aboriginal and Torres Strait Islander peoples’ disability, research proves that there are issues and shows what they are.”

Ms. Cullen is also an educator, researcher and mentor. Professor Elizabeth Kendall, Program Director of Disability and Rehabilitation at the Hopkins Centre, Menzies health Institute Queensland, Griffith University said “Jennifer’s long association with Griffith has provided our researchers and students with many great opportunities. Jennifer played a crucial role in mentoring researchers and educating disability managers and it is this ongoing commitment to workforce capability and development that sets her leadership apart.”

Ms. Cullen’s work extends to developing the next generation of Aboriginal and/or Torres Strait Islander leaders by implementing on-the-job mentoring programs and personally mentoring young people as they work towards completing their academic qualifications and engaging in meaningful work.

“I’m where I am today because people chose to commit to helping me grow wisdom and understanding,” said Ms. Cullen. “My job is to guide and provide the same to those around me and the young generation of leaders coming up behind me.”

In 2017, Ms. Cullen commenced as Director of the Machado-Joseph Disease Foundation (MJD Foundation), an organisation that works in partnership with Aboriginal Australians, their families and communities living with this highly disabling genetic neuro-degenerative disease.

MJD Foundation CEO, Nadia Lindop said “Jennifer’s knowledge of the disability sector, the NDIS and how to navigate systems from a practical level, right up to a government policy level has been invaluable to the MJD Foundation, especially during a time of such change in the sector.”

Ms. Cullen has plans to extend her work and the work of Synapse further across Australia.

“Working in the area of disability is where I belong,” said Ms Cullen. “We’re extending Synapse work into most if not all States and Territories next year, including rural and remote areas. I look forward too many more years of working together to create change.”