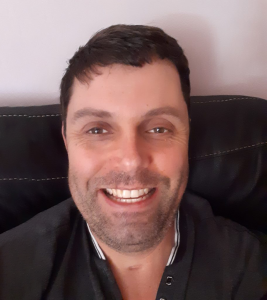 In 2001, Dave was an eager student keen to study IT at university when one day on his way to school he pulled out in front of a car. Dave blacked out and can’t remember the accident, or the three months following. Dave, unfortunately, suffered a brain injury and spent seven months recovering in hospital before continuing his recovery at his parent’s farm in Mudgee.

“I was in year 12 at the time and I was on my way to school. I pulled up at the T intersection, waited for a car to go past and I didn’t see the car behind it, so I pulled out in front of it. It happened in September, right between my trial exams and the HSC,” said Dave.

Library of the mind

Before the accident, Dave saw his brain as an organised library were if he wanted to do something it took minimal time to find and retrieve the book on how to do it. After his accident, Dave felt the library of his brain was muddled.

“After my injury, it was as if the library had been picked up and shaken, causing the books to fall from the shelves. Leaving a complete mess with no catalogue system. If I wanted to find a memory or a book on how to do something I would have to pick up one book at a time, examine the front cover, and think to myself, ‘is this the book I am looking for?’ If it wasn’t the book, I would throw it over my shoulder and pick up the next book.”

After a long recovery, Dave did eventually attend TAFE and then university as planned. The support of friends and family helped him regain some function he’d lost and work on his ability to organise, problem-solve, and remember.

“I came over to Bathurst and did a Certificate IV in IT at TAFE. With much support, I successfully completed that in 2003. In Bathurst, the university and the TAFE were on opposite sides of the same road. So, each day when I was walking to TAFE, I would wonder how I’d fare at university.”

After Dave had finished his certificate, he applied to study a Bachelor of IT at university and got accepted. While he was studying, he met his now wife and swapped his degree to better support how his brain worked after his brain injury.

“My subjects in IT were very abstract and the part of my brain that was used to solve abstract problems was injured, so I really struggled with them. To make things a little easier on myself, I swapped to Business as it was more black and white, there was a right and wrong answer.”

Life as a father

Dave is a father to 12-year-old twins, who keep him very busy. In his spare time Dave has focused on writing a book about his experience living and raising kids while having a brain injury.

“Even after my brain injury, I still had normal adult life goals. My wife and I are incredibly lucky that they are healthy and happy kids. Becoming a dad has been a steep learning curve for me and it has been challenging at times, but I am glad that I am a dad now.”

After being a shy person in high school, Dave is now happy to talk publicly about his experience and his book. His advice to others living with a brain injury is never give up and find something to be grateful for.

“A big piece of advice I have for people who have sustained a brain injury, or even the loved ones surrounding that person, is ‘never give up.’ I know it can get very disheartening at times, but the more you practice, the more likely you are to rebuild those neural pathways and regain some of the abilities you have lost.”

To read more about Dave’s story you can purchase his book through his website davidwpaton.com